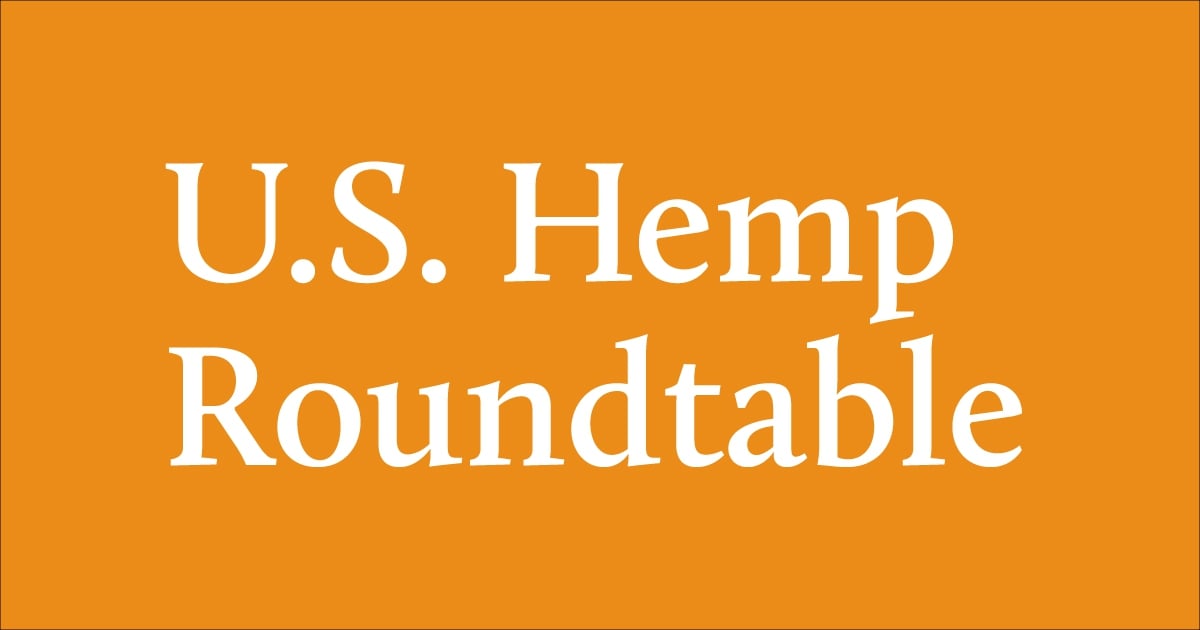 Why the Leaders of the Hemp Industry Trust VoterVoice The U.S. Hemp Roundtable is the hemp industry’s national advocacy organization committed to safe hemp and CBD products in all 50 states and at the federal level. Formed in 2017, the organization began as a coalition of hemp companies with the common goal of legalizing industrial hemp. Since accomplishing this goal with the passage of the 2018 Farm Bill, the U.S. Hemp Roundtable now focuses its time and resources toward legislative resolutions for industry solutions.

In its first four years, the coalition has grown to include dozens of companies, including the hemp industry’s leading national, regional, and state grassroots organizations and companies working in CBD, food and beverage, hemp fiber, pet products, and dietary supplements, among others.

Current U.S. Hemp Roundtable priorities include the push for the U.S. Federal Drug Administration (FDA) to regulate hemp-derived CBD as a food and dietary supplement, state regulation of products containing Delta-8 THC, and ways to support minority businesses involved in the industry. Additionally, the coalition has formed a committee to support the industry in the research and development of sustainability initiatives and incentives.

In just three years, the U.S. Hemp Roundtable has been able to get pivotal legislation passed to ensure the future of the hemp industry and built an audience of more than 30,000 followers or “Hemp Supporters” using VoterVoice.

“We’re a very diverse group of people and organizations fighting for regulation and legislation to advance and promote the hemp and CBD industries and all that they encompass,” says Alyssa Erickson, marketing coordinator at the U.S. Hemp Roundtable.

Leveraging Tech to Mobilize Hemp Supporters Across the Nation

When it comes to effecting change in legislation and regulations, the U.S. Hemp Roundtable reaches beyond its 80+ member organizations. Using VoterVoice since its inception, the coalition has grown its list of Hemp Supporters to 30,000 strong and become the leading advocacy group for hemp and CBD in the country.

“Before we were able to hire staff with expertise, I had to build and maintain a website with no website management or development experience. VoterVoice made it simple to add an effective tool to our young website, allowing us to activate our audience to send real and meaningful calls to action to their state and federal representatives,” said Katelyn Wiard, director of operations, at the U.S. Hemp Roundtable.

VoterVoice has allowed Wiard’s team to easily create campaigns, embed them on their site, target messages to specific segments of their list, track metrics and benchmarks, and share meaningful reports with the coalition’s leadership and membership.

“Each year we assess our finances and we have never questioned the need to re-up VoterVoice; it’s been a very useful tool for us,” said Wiard.

Stifling the Grassley Amendment to the 2018 Farm Bill

The U.S. Hemp Roundtable has its origins around the passage of the 2018 Farm Bill. With its hemp provisions (the Hemp Farming Act), it was set to open the door to a plethora of opportunities for the industry. However, much of that potential was threatened when Senator Chuck Grassley, R-IA, filed an amendment through the Senate Agriculture Committee which would have restricted the sale of hemp-derived products, effectively stifling the CBD market.

“We set up a VoterVoice campaign encouraging our audience to urge their members of Congress to vote no on Senator Grassley’s amendment,” said Wiard. “It was so effective — Senator Grassley withdrew the amendment prior to a committee vote, and it really displayed the power and usefulness of VoterVoice as a tool.”

The compelling call to action clearly laid out the detrimental effects to the burgeoning hemp industry this amendment would have and thus how important it was to reject it.

“VoterVoice enabled our audience of hemp supporters to act immediately,” said Wiard. “Members of Congress received 23,453 emails urging them to vote against the Grassley amendment. This strong display of advocacy spoke volumes as the Grassley Amendment was never brought to a vote. Senator Grassley even began to proclaim himself as ‘pro-hemp’ and the Farm Bill passed out of the Senate Agriculture Committee with the full Hemp Farming Act included. It was signed into law, legalizing hemp, on Dec. 20, 2018.”

The passing of the 2018 Farm Bill opened the door for non-psychoactive forms of cannabis to be permanently deemed a legal agricultural commodity, making room for federally regulated institutions — such as banks, credit card companies, e-commerce sites, and advertising platforms — to engage in commerce with the hemp and hemp products industries.

“Blocking the Grassley amendment to the 2018 Farm Bill was by far one of our most successful campaigns and set us on the path to continue utilizing the VoterVoice platform to allow our audience’s voices to be heard,” said Wiard. “The fact that we were able to send a call to action that activated almost 25,000 people is super powerful — and that power was given to us through VoterVoice.”

Build a Burgeoning Industry but Make it Equitable

As part of its mission, the U.S. Hemp Roundtable aims to help create an equitable hemp industry. When the COVID-19 pandemic hit, affecting all sectors of the economy, the coalition tapped VoterVoice once again to strongly endorse the Emergency Relief for Farmers of Color Act.

But the clock was ticking; the U.S. Hemp Roundtable had to move quickly to get its networks of supporters to act and VoterVoice ease of use was key to the success of this campaign.

“We were able to put something up on VoterVoice quick and push it across the finish line and give it that extra oomph,” said Erickson. “Because we have the ability to get something up so quick and out so fast [with VoterVoice], we can do a really quick turnaround and it makes a really big impact.”

In only five days (March 3-8, 2021), 128 individuals sent 350 messages to 169 different recipients, while these numbers might not look so impressive, the fast action certainly helped tip the scale in a very narrow decision.

“An attempt to strike this language was defeated by the slimmest of margins (49-50), so it is clear that grassroots advocacy made a difference,” said Wiard. “The legislation passed in the House and more than $5 billion was awarded to farmers of color across the nation, assisting them with pandemic relief, and helping redress centuries of discrimination.”

“Since the passing of the Farm Bill in 2018, the single greatest challenge of the developing U.S. hemp industry has been the lack of regulation over hemp-derived extracts, such as the popular non-psychoactive ingredient known as CBD or cannabidiol,” said Erickson.

The U.S. Hemp Roundtable is again leveraging VoterVoice to spearhead an initiative to press Congress to regulate hemp-derived CBD as a dietary supplement and a food and beverage additive. As part of a larger coalition of companies and organizations, the U.S. Hemp Roundtable created a stand-alone campaign through VoterVoice to mobilize Hemp Supporters across the nation to support Senate Bill 1698 and House Bill 841.

In only two months, the campaign has engaged 370 supporters that have sent more than 1,190 emails to 279 recipients in Congress.

“Being able to use VoterVoice has made running our advocacy campaigns effortless and effective,” says Erickson. Plus, she says being able to see all engagement data in one place has been beneficial. “It’s all going to the same place and we can go in and see how many messages are getting sent, how many people sent them, where they’re being sent to, and then we can also relay that to our members and show the progress. [VoterVoice is] very easy to use and very productive for what we’re trying to accomplish through the U.S. Hemp Roundtable.”

FiscalNote’s flagship advocacy suite, VoterVoice, is at the center of the U.S. Hemp Roundtable’s advocacy strategy. From keeping supporters and stakeholders informed about the organization’s efforts and important updates on its issues, to firing up its base and mobilizing them to further its mission, VoterVoice is there every step of the way.

“VoterVoice has enabled us to become the nation’s leading hemp organization,” said Erickson.